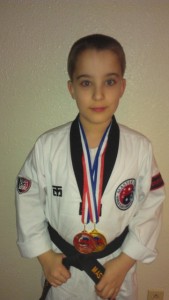 A few weeks ago Sammy wasn’t even sure he wanted to go to this tournament. Had to have a talk with him to find out why….turned out he was nervous because it would be his first as a black belt.

So I reminded him about previous tournaments, and the medals he had…before this tourney, the numbers were: 5 gold, 1 silver, and 2 bronze. And reminded him how good he is, and how much work he’s put in…and he decided he would give it a shot.

The tourney was yesterday, and the pic above from when we finally got home last night.

He earned a bronze in poomse (forms)…and unfortunately, it’s the most subjective of the events, with three judges simply judging who they think did the better form…(often no the same form between competitors). And he was not at all happy. I worried it would destroy his confidence…it certainly looked like it did. When he came back up to the stands afterward, I talked to him, calmed him down, and told him to channel that anger for motivation in sparring.

And did he ever.

First match, he jumped out to a 5-2 lead at the end of the first round, including a perfectly-time sidekick as the opponent came at him, stopping him in his tracks (and probably stinging a bit). He finished that match 8-3. And I could see he was focused.

Second match was interesting. It wasn’t a very offensive round, with Sammy jumping out to a 1-0 lead. But suddenly the other kid was on the ground, holding his leg. I didn’t see what happened, but guessed it was probably a shin-to-shin hit from kicking simultaneously.  Whatever it was, either the kid or the coach decided he couldn’t go on, and Sammy won the match.

And as it turned out, the gold as well.

[Oddly enough, the same medals in the same events as last year at this same tournament!]