We started this project at the beginning of the year as a way to learn about the history, customs, and geography of the countries of the world. You can read more about the initial aims here.

We’ve received a couple of very generous submissions via social media, and more coming. But so far, these are the countries for which we have some sort of currency, either in bill or coin from: 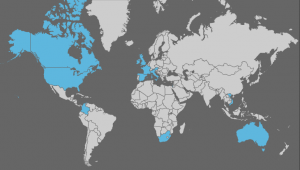 I initially had Sammy do the following for each of the coins/bills:
1. Identify each country, the currency, and denomination
2. Identify characteristics or significant features of each coin/bill
3. Who was the leader at the time of the minting? What significance does that leader have in the country?

As he started going through them, we quickly realized there was a LOT in just those three areas.  For instance, identifying the Israeli coins–in part because they are in Hebrew, and in part because they’ve gone through a few rounds of major changes in their monetary systems over the years.

But there were also some sidetracks from curiosity. For instance, the coin we received from Austria was very, very light compared to others, so he began looking up the metal composition of the coins, and while most were a copper-nickel alloy, the Austrian coin was made from aluminum.

He’s also discovered the change the Euro brought and learned quite a bit about that. Many of the coins from Europe we received are no longer in use, displaced by the Euro.

The coolest thus far? The 1949 centimos from Spain–not only is it old, but the design is neat–has a hole in the middle. And in looking up the history, discovered that during World War II, while officially neutral, Spain had sent a special division to aid the Germans against the Soviet army.

Next update will be all Sammy…