Skip to content
HomeArchivesDiscipleship: Living for Christ in the Daily Grind by J. Heinrich Arnold 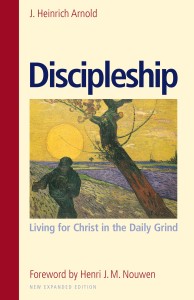 This book intrigued me.

In first intrigued me in the offer I received to review it, because it was endorsed by none other than Mother Teresa, who said of it:

“I pray for all who read this book that they may come to follow Jesus more closely in their whole lives. He has not called us to be successful, but to be faithful.”

That alone speaks volumes…but even (or especially) for me, doesn’t speak quite enough.

The introduction, I think, was written to me..or in some ways, almost by me in how it is written, but it sums up not only the book, but the man, his life, and my growing intrigue. It opens with this:

Some books are easiest to describe by saying what they are not. This is not a collection of devotions or meditations, not a “feel-good” journal about walking with God, and not a guide for self-improvement or personal spiritual growth. It is, very simply, a book about discipleship–about following Christ humbly, obediently, and with an open heart. And it is written by a man whose message cannot be understood in any other way.

You see, to understand the book (or more fully, at least), you must know the background. And that background is what intrigues me and adds weight to the words.

Mr. Arnold was born in Germany in 1913, and when he was 6 (in the then post-WW1 Germany), his family left their upper-class life in Berlin to central Germany, where with a small group of friends, started a commune, where they sought to live in full community much like the early Church.  Think of that setting alone: war-ravaged Germany, economy in ruins, political upheaval…and they leave their relatively comfortable life to start a commune. But there’s more, because it wasn’t just a “our group only” kind of commune, but as the book describes:

“…the steady stream of young anarchists and tramps, teachers, artisans, and free-thinkers who came through the little community influenced him profoundly. All of them had abandoned the hypocrisy of a Christendom that had grown meaningless, and many felt drawn to the life of dedication and joy they found at Sannerz [the commune].

The book draws from published articles, many personal letters, transcripts of meetings, and all sorts of writings, and they all reflect a genuineness that is unique, especially, I would dare to say, and say with a bit of a heavy heart, in American Christianity. It is refreshing.

Here’s one example, timely as it is, considering my previous post.

Leaders of a church have no rights whatsoever over the souls entrusted to them. Consider how Jesus entrusted his flock to Peter. He did not give him any rights over the lambs. He only asked, “Do you love me?” And then he said, “Feed my sheep.” It is a terrible sin–really nothing less than murder–when someone entrusted with a pastoral service thinks he has the right to govern souls.

How’s that for a paradigm shift?

I’ve already started the dog-earing of this book. That’s one of my standards on how to tell if a book is good…and this book meets that standard. I wholeheartedly suggest it. Click the pic at the top (or here) to check it out on Amazon.

Disclaimer: Yes, I did receive a copy of the book for this review. No, the receiving of the book did not (and would not, and could not) sway the review.