While the official launch date is tomorrow, March 11th, I was able to pre-order mine…and surprisingly, it arrived 10 days early. So I’ve definitely been using it the past week and a half, so thought I’d share my unsolicited review.

I was coming from an S5, and had skipped the S6. And frankly, I was starting to get impatient with the S5’s performance. Toward the end, I’d replaced TouchWiz with another launcher (Asus’s ZenUI), which helped tremendously. But I digress…

So let’s get to it. The four main areas I want to talk about are the feel or quality, battery life, performance, and the camera.

Out of the box, the phone felt much like the bare S5 (I almost always have my phones in a case, and there have been many times, from the S3 until the S5, that it’s saved the phone).  Not too heavy, not too light. Well put together. The only real knock on it is how Samsung has chosen to incorporate the SIM and SDcard….that holder (in pic below) and how the cards fit in feels like they are barely held on, and then you’re inserting that down into the phone, and a tight fit at that. Made me a little nervous. 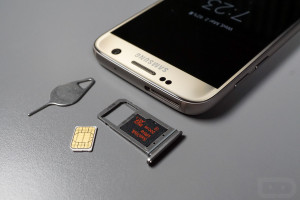 The battery life has been fantastic. And with a 3,000 mAh battery, it should be. Add to that the fast-charging capability (amazing, by the way), and it’s a clear winner.

Again, my frame of reference may be off a bit, coming from the S5. But both TouchWiz and overall, performance has been fantastic without slowness or stuttering. Matter of fact, I’d tweeted yesterday when I realized Chrome was telling me I had 43 tabs open, and the phone didn’t even seem to notice.

Another feature of the S5 that was starting to grind on me was the front camera’s low quality (2.1 megapixel). They made up for it in the S7 (5 megapixel), and the colors and clarity is so much better, as is the rear camera (12 megapizel). And one of my favorite features is the use of the heart rate monitor as the camera shutter button when using the front camera (ie selfies!).

The S7 isn’t perfect. Frankly, no phone will ever be…but it certainly is edging closer to it that any other device I’ve used or have seen.

Other note: Samsung Smart Switch…a fantastic inclusion to the set up process, using the included USB cable and the adapter, allowing users to directly transfer the important info from your old phone (iOS, Blackberry, or Android) to your new. Sure, there are plenty of apps that can do most or all of that, but this made it simple.

Additional:
The case I’m using for my S7
The SDCard I have in it

While the official launch date is tomorrow, March 11th, I was able to pre-order mine…and surprisingly, it arrived 10 days early. So I’ve definitely been using it the past week and a half, so thought I’d share my unsolicited review. I was coming from an S5, and had skipped the S6. And frankly, I was…

In Defense of Dr Ben Carson…