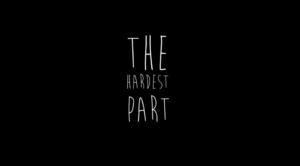 A few weeks ago in this journey, I probably would have said that the hardest part was the waiting. But I’m a fool.

And while the diagnosis was hard, it wasn’t the hardest either, and was buffered with the other possible outcomes which would have been far more difficult.

Knowing the some of the difficulties that lie ahead for Evanna, for us, for our whole family…that’s not the hardest.

The hardest part is this: asking for help. And I know I’m not alone in that, since as I was mulling this over today, JoAnn had posted something on Facebook along those same lines.

While I’m not alone in the thought, I can’t necessarily speak for her as far as why it’s the hardest. But I can explain why it is for me.

In a way, it boils down to a severe case of independence that started when I was young, out of necessity. To very briefly summarize my childhood: not good, lots of pain, definite trust issues. Even in high school, on the Speech and Debate Team, what was my choice? Lincoln-Douglas debate. Solo. On my own.

And now? We homeschool. I am self-employed. There’s a bit of a theme there.

But what I’ve also come to realize, especially after the recent scare with JoAnn going into the local ER (with what turned out to be, as far as the doctors could tell, her passing a kidney stone)…is that some people do want to help. That they actually, really mean it when they offer. And so we let them.

And you know what? It was a blessing to us AND to them…one that had we not allowed, would have robbed us both.

So with the fundraiser, I’ve been blown away. Some people we know well, some we are only acquaintances, some we don’t know at all…but they’ve helped.

I’ve also adjusted the goal upward, and may again as I’m able to plan out better the days following Evanna’s birth. Remember the part above about me being a fool? Well, I’m also a fool to think I won’t want to be up at Seattle Children’s far more than those first 2-3 days and then occasionally after.  After those first few days, I may be working, but it’ll likely be up there, with trips away only for dire issues. My focus is still going to be my little girl.

It’s in that time I’ll also have to learn some additional lessons about trusting and letting people help. Some will be doctors and nurses, some will be other workers helping guide us through applying for certain medical assistance and learning to care for Evanna, some will be with those helping out with the kids back home. But to drive the point home, I’ll get plenty of chances to let go of things, to trust, and to let people help.

The fundraiser is one of those ways. If you can help…even with just a few dollars…it all helps. Even if you can’t, going to the fundraiser and sharing from there to Facebook or Twitter helps too!

A few weeks ago in this journey, I probably would have said that the hardest part was the waiting. But I’m a fool. It’s not. And while the diagnosis was hard, it wasn’t the hardest either, and was buffered with the other possible outcomes which would have been far more difficult. Knowing the some of…