This year marked the fifth anniversary of our time in PICU at Seattle Children‘s, and I wanted to provide details that we hadn’t previously talked about outside of our family. In part I wanted to do as a sort of catharsis, but also because unless issues are brought to light, they are not fixed…and there certainly are some fixes needed.

The question though is how to relay the information. Much will be what we’ve written about on Evanna’s FB Community Page during that time and since, but some details we’ve never discussed until now.

So let me set the stage leading up to just after the first shunt replacement.

May 11, 2017. A Thursday. Evanna had PT, and one of the things that had been worked on what had been thought to be torticollis, which is where Evanna wasn’t able to turn her head part of the way in one direction. We now know this wasn’t the case. Her shunt tubing had adhered to tissue somewhere along where it ran down the side of her neck. At this particular PT session, the therapist had been stretching (carefully, but stretching), when she suddenly cried out in pain  Initially, no signs of issues were displayed.

Later that day, we began to notice fluid build up around the site of the shunt. A slow build up, but building up nonetheless. And she started to get fussier than normal. Called that evening to the Seattle Children’s on-call neurosurgeon, and he displayed little concern, suggesting that we wait, and follow up with an appointment with her regular neurosurgeon the next day if needed. We discussed for all of about 30 seconds, and decided JoAnn would take her up to have her checked out, against that advice, because any issues with shunts can turn critical quickly, especially when there’s already symptomatic Chiari Malformation in play. So they get up there, get checked in, eventually get seen, albeit with a little attitude from that on-call neuro. Turns out, and for the purposes of this post because it becomes a theme of this visit, we were right. The shunt had an issue–the tubing had become disconnected from the valve.

Next day, they schedule surgery and replace the shunt (May 12th)

But now has low O2 levels that they’re watching, and initially flowing O2 past her mouth and nose. 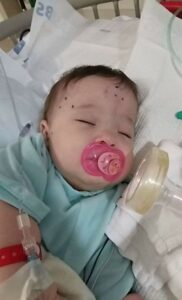 We’ll come back to this, but for now, on to the rest of the timeline.

On the 13th, she’s up and down as she recovers from surgery.

On the 14th, mostly back to her happy, smiling self.

On the 15th, determined her desats are enough that she will require oxygen during the night and when she naps. Later on the 15th, Evanna starts acting sick, cranky, and her lungs are “junky”. She’s going downhill. We get coverage for the other kids so I can be up there alongside JoAnn.

On the 16th, despite our emotional state, we have to get a little forceful with the treatment team. You see, neurosurgery decided the day before that this was all just a pulmonology issue, so they bowed out. We saw the decline, and looked at ALL of the symptoms, and demanded they get neurosurgery back in to check the shunt. We had to fight for it. Guess what was discovered? The shunt was failing because the catheter that runs from the ventricles up to the shunt was clogged or partially clogged. Back to surgery to replace the replacement.

Evanna’s out of surgery. Don’t have much of an update beyond that yet because…well, they changed plans.

Originally she was supposed to go to PACU (post-anesthesia care unit) after the OR for initial recovery/wake-up, and JoAnn would be there with her, then go up to PICU with her.

They decided–without letting JoAnn know–that they were taking her straight to PICU, and intubated…and the real kicker…JoAnn wouldn’t be able to be with her or see her for an hour after her arrival in PICU.

Needless to say, mom was not a happy camper. And let them know.
On the 17th, she’s recovering, with spurts of her normal self, but that quite there yet. O2 stats are better than prior to this last shunt replacement. Sleep study that night. 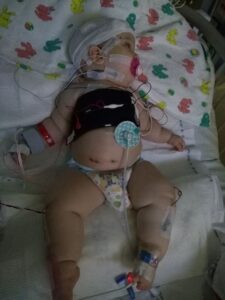 On the 18th, more recovering. Anesthesia does a number on her, so it’s a slow recovery.
On the 19th, I head back up. The team of doctors and specialists, along with the Patient and Family Relations Director (who is supposed to serve as a kind of mediator between patients/their families and the medical/bureaucratic side) called for a care conference. The purpose was to bring together everyone involved and discuss issues and possible treatment plans. Remember the part about doctors saying “..she must have had this all along”? Yeah, well in addition to hearing that back on the 12th or so, and hearing it nearly nonstop since, and because of our emotional state from the past week and all that had gone on, we listened to much of the same garbage. Again. And we lit into them a bit, going through the facts once again, on the record, that that could not be the case, and how we had to fight through this whole time to get treated based on the entirety of her symptoms and not just each specialist only looking at what they wanted to look at…and that we were tired of hearing this, and tired of  having to fight so hard for her to be treated correctly. It mostly went in one ear and out the other, I think, looking back. And then we were presented with 4 treatment options, ranging from completely non-invasive (essentially no treatment, and head home) to completely invasive (trach and j-tube).
The way it was presented was shocking enough that afterward, I asked the Patient and Family Relations Director in writing what the legal repercussions were for each, and whether anything short of that most invasive would be considered against medical advice. Yeah, in the midst of all of this, I had to worry about whether this would be used against us. Those how hostile some of this felt at the time.
We did convinced them to bring in a larger bed into the PICU to allow for cosleeping. That night was our first night. Nurse says she had much less apnea and heart rate episodes compared to previous night…(SHOCKING) 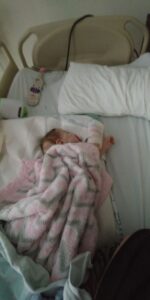 On the 20th, she’s so much better. Playful, happy. That night, we had our first night of the decided-upon treatment plan (less invasive use of ventilator in bipap mode when sleeping, monitored with PulseOx). Heard horror stories about babies and toddlers fighting the mask, but from the moment the tech began even with just fitting her for the mask, she didn’t, and between that and the cosleeping, she slept great that night, and woke up happy and perky. 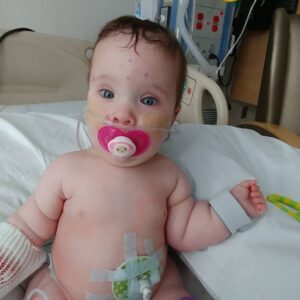 On the 22nd, moved out of PICU to the pulmonary unit. And for the first time in 11 days, she got to go outside, which she loved. 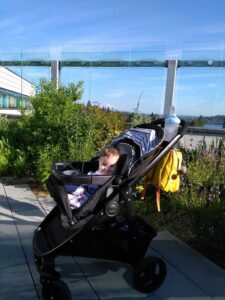 Continued improvements through the 25th, when JoAnn figured out how to use the portability of the stroller and attached and use the vent and PulseOx on their way out of the hospital. 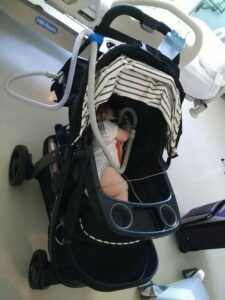 So that’s the first part of the horrific treatment. How would I sum it up?
1. Incessant claim that “..she must have had this all along” despite repeating the proof against it. This led to a lot of suspicion, that either something happened in the first shunt replacement surgery OR they know they waited too long for a patient with symptomatic Chiari. Either way, and in the emotional state I was in at the time, there’d be no way to prove that.
2. Specialists too focused on “their part” and nobody seeming to look at the whole of the symptoms. The fact that neurosurgery bowed out of her treatment was irresponsible, and we should not have had to fight for them to be back as hard as we did.
But there’s more.
At some point at the tail end of our time there or shortly thereafter, after discussing further with the Patient and Family Relations Director, I had him submit what amounted to an informal complaint (I don’t recall what it was called). I received the formal letter shortly after returning home that outlined the timeline (believe was six weeks), at which time I’d hear back. to include the steps Seattle Children would be taking (both in regard to our issues and to preventing them in the future).
The timeline came and went, and frankly I didn’t think too much of it until the next year, when I’d requested a copy of her records to look through. Realized I hadn’t heard back and asked about it.

We sent what we call the “acknowledgment letter” on May 26th and I failed to send the follow up summary letter reflecting the steps taken—I apologize.

I wasn’t sure what exactly he meant when he stated he failed to send it, so asked for a copy of that summary letter.

I’m sorry I wasn’t clear—I never wrote the follow up letter—that’s what I was apologizing for, he said sheepishly.

He added no details on what those steps taken were, so…nothing was done.  The very processes put into place to help and protect parents and patients was…dropped. Nor was there any follow-up after this revelation.
When we write about our lack of trust in Seattle Children’s, this is why.

This year marked the fifth anniversary of our time in PICU at Seattle Children‘s, and I wanted to provide details that we hadn’t previously talked about outside of our family. In part I wanted to do as a sort of catharsis, but also because unless issues are brought to light, they are not fixed…and there…